Mcafee Total protection has always alerted me when I've got a virus. Although admittedly most of them were from my earlier days lol. Probably only bad thing is a memory leak.

An average home user antivirus product that I purchased at a special price which I think could be very expensive to renew.

We had a very irritating adware and couldn't find a way to get rid of it. I contacted McAfee via their chat application. Really impressed with them - well worth our subscription. 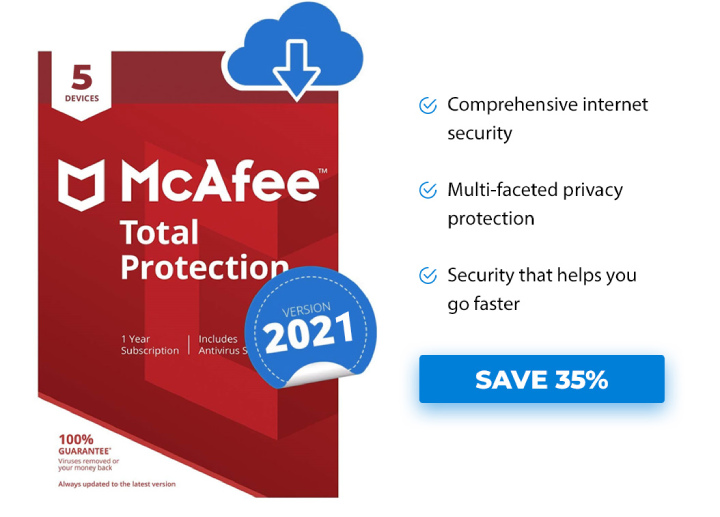 McAfee is one of the most popular antivirus suites that can be used on both desktop and mobile devices. McAfee antivirus offers advanced security options and, according to independent tests, repels the vast majority of cyber threats. Let’s dig deeper in our McAfee review to reveal why this product is being used by millions of clients around the world.

McAfee has been around since 1987, and as the result of a partnership with numerous well-established IT companies, it started providing reliable and efficient open-source software that leverages high-end technologies. From 2014 to 2017, McAfee was owned by Intel Corporation, and was renamed as ‘Intel security.’ However, some of its products still bear the name of McAfee.

McAfee specializes in digital security software for PC, servers and mobile devices. McAfee software is praised for simplicity of navigation and flexibility, and antivirus solutions are not an exception. Read our McAfee Antivirus review to learn what the software has to offer, and which features turn it into one of the industry leaders.

While testing McAfee antivirus software,  we revealed the following advantages and drawbacks:

McAfee’s pricing mostly depends on the number of devices connected. The cost of McAfee Total Protection is:

Users can also order a 30-day free trial: suites for PCs, Macs, tablets, and smartphones are available, and up to 10 devices can be connected.

There is also a 100% money-back guarantee in case the software doesn’t detect viruses (naturally, many additional terms apply, and the service is available for users from a few certain countries only).

There are several packages available:

All packages of the software support: 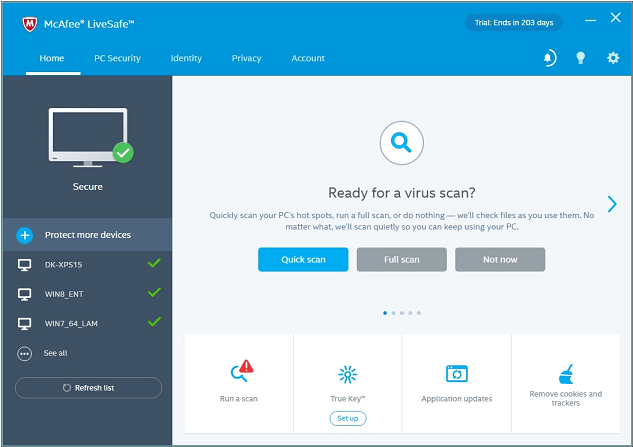 During recent years, McAfee’s scores in independent antivirus tests have been controversial: the software repels some malware quite well while ignoring new threats.

The researchers at AV-Test Institute evaluated the quality of protection according to three criteria: how it protects against malware, how good the performance is, and how much it interferes with usability. For each aspect, the software could earn six points and get a maximum of 18 points.

McAfee’s score ranged from 14.5 to 17 during the last three years. Therefore, McAfee is far from perfect: although it prevents most widespread attacks and blocks well-known threats, the program fails to mitigate banking trojan viruses.

Good news: all the packages have an inbuilt firewall that hides ports and withstands web-attacks efficiently. Instead of sending requests for connection, this firewall performs the program control on its own. It’s pretty efficient except for the cases when targeted attacks are made.

McAfee has a gaming mode that suspends some functions while you play computer games, so you aren’t interrupted by lag or pop-up reminders. However, you must enable this feature yourself since it doesn’t kick in automatically.

Since 2017, the team has introduced Real Protect function: it can identify the threats by analyzing suspicious objects. The software starts registering its activity and requires cloud-based analysis – its results can rank the file as malware.

The antivirus works well against phishing (it blocks the vast majority of suspicious websites during browsing), spyware, rootkits and trojans, filters spam. Unfortunately, there’s no adware and Chat/IM protection.

According to tests, McAfee blocks about 85% of harmful links – most of them are blocked by ceasing the access to the URL address. When it comes to phishing, McAfee internet security has become much better: kile Kaspersky, it blocks almost 100% of malware. What you should be aware of is keyloggers – the software ignores them.

One of the main software’s drawbacks is that McAfee doesn’t notify the user about malware it blocks – it silently quarantines viruses without you being aware of it.

Detailed and 24/7 scanning is McAfee’s strong side because it performs all possible types of scans:

To top it off, McAfee has a firewall that protects the user during browsing and scans social media pages for threats.

McAfee is very easy to install and use. The download process is fast, but you need to create an account, even if you use a free version. It has clearly labeled buttons and tools, and the most important features are displayed on the main interface. A user doesn’t have to do much manually – the software cares about:

If you’re new to McAfee antivirus, there’s a tour explaining how the program works, and which way the functions and tools are utilized (it’s activated when you open the application for the first time).

The only thing that poses challenges is the detection of quarantined malware – McAfee doesn’t notify the user about blocked threats. The blocked viruses can be found in the Settings section.

The installation of McAfee can take a few minutes. It requires the following steps:

When the installation is done, don’t forget to create a strong password to ensure solid security.

The process isn’t hard for an average user – no settings are specified during the installation, and McAfee website will suggest a suitable antivirus version for your OS.

Recently, McAfee redesigned the interface for Windows antivirus suits. It has a short menu that breaks down into five sections: Home, PC Security, Identity, Privacy, and Account. On the left, there’s a security indicator that shows the level of protection and the list of protected devices. Recently, McAfee renewed macOS version design, so two desktop versions look alike.

Mobile apps also boast intuitive navigation – all basic features can be controlled in a couple of clicks.

McAfee has one serious downside – it affects performance and causes logs even when working on the background. The impact is significant during deep scanning, for example, whenever a user wants to attach files to an email, navigate software or programs, there might be a significant slowdown.

It can run to the absurd: the cursor doesn’t catch up, and the user clicks the wrong buttons. This is a serious drawback for those who work or play. Therefore, McAfee scanning should be performed when you don’t have to use a computer.

Another merit of the software that should be mentioned is 24/7 customer support. The assistants help at every stage of product use. You can find an extensive knowledge base on the official website, as well as an FAQ page and community forums. McAfee support service can be contacted via live chat, phone, or email – you can select any convenient way. This is a significant advantage – many well-established companies are far from such level of support.

Although this is not the safest antivirus, users praise it for simplicity of use and excellent protection in particular cases. Such features as McAfee Livesafe, firewall, and multi-factor authentication make it stand out. McAfee antivirus can be highly recommended for family use because the number of devices connected isn’t limited.