Based in Colorado, Webroot guards users against all cyber threats since 1997. Over the years the company made many acquisitions, expanded the resources and, consequently, became more advanced and versatile. Today this provider offers solutions designed to meet the needs of both home and business users. 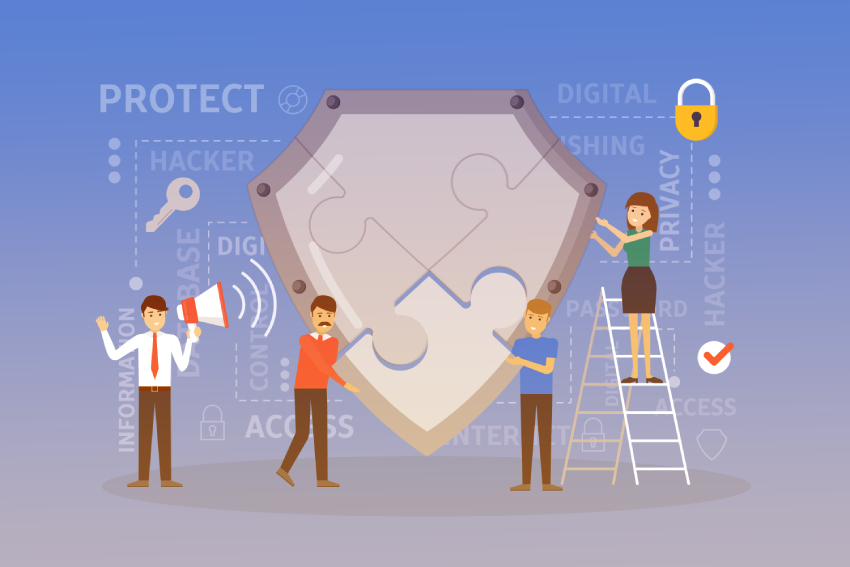 Despite the impressive number of features, the program is incredibly lightweight. Since the main part of the antivirus is based in the cloud, it takes almost no space on the computer. And it doesn’t mess with the performance. Webroot claims that it takes only 20 seconds to scan the system. That’s shockingly quick.

Also, it doesn’t require much both from the CPU and the operating system. It will perform flawlessly even on the old Windows XP computer, unlike many other antiviruses. Therefore, it is an excellent solution for old-fashioned users who can’t say goodbye to the outdated software.

Price-wise Webroot is on the same level as many of its competitors. We can’t call it cheap, yet we wouldn’t say it’s expensive.

Still, no antivirus is perfect, and in spite of numerous merits, Webroot still has its fair share of drawbacks. Keep reading our Webroot antivirus review to find out the pros outweigh the cons.

You can get a free trial for 14 days to figure out if you like this antivirus before buying. Moreover, if you change your mind, you have the full 70 days of the money-back guarantee. Webroot is unbelievably generous with this rule. But we are glad and ready to take this deal.

Due to the unusual way of detecting threats, it is hard for professional labs to test Webroot. Instead of blocking the malware immediately, this antivirus allows the sample to run for a while and analyzes its behavior. It further  kills the process and blocks the sample only when the system confirms it is malware

While Webroot watches over the suspicious program, the user stays protected. If it is a threat indeed, the antivirus will remove it and discard the changes it managed to make. But even though such an approach works perfectly well, classic tests take this as a fail.

Even the more sophisticated test by SE Labs didn’t succeed in evaluating this antivirus properly. A more flexible pattern of scoring couldn’t understand the algorithm Webroot uses and thus, marked most attempts as a failure.

The only lab whose tests made any sense is MRG Effitas. In the second quarter of 2018, this lab released a report where Webroot was included. And the scores were more realistic – during the tests, the behavior blocking approach was considered. As a result, the test has shown that the antivirus didn’t miss any threats both during Full Spectrum and Ransomware evaluations.

Since we couldn’t fully rely on tests when evaluating Webroot’s effectiveness, we turned to users to check their experience. Going through reviews, it is evident that customers are more than satisfied with the antivirus. Besides, as we tested it with our samples, Webroot blocked all threats even though it didn’t kill them right away.

As the malware was launched, the antivirus reported about the threat and proposed to remove it. Once Webroot killed the virus, the system asked to scan the computer to check if any other malware is left. While some users might get confused with a full scan only because of one virus, they shouldn’t be concerned.

Webroot takes only several minutes to check the whole system. If it finds any threats after the scan, it will offer you to run another one. The cycle will continue until no malware is found. So eventually, this antivirus found and removed all the samples we had on the computer. 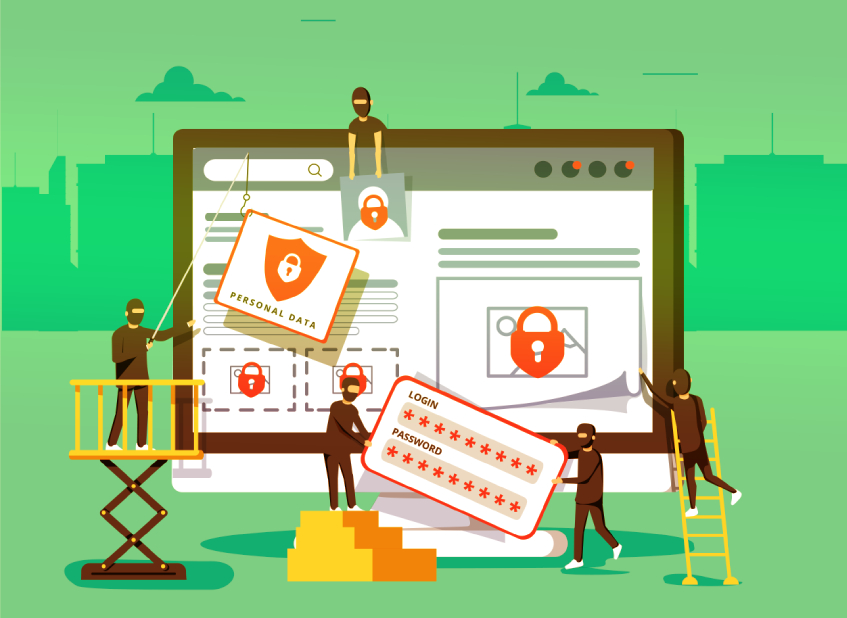 However, the behavior-based approach doesn’t let Webroot block potentially threatful URL that efficiently. The antivirus works in a way that it won’t pay much attention to files that were merely downloaded, but once executed, they will be eliminated.

Webroot also offers decent anti-phishing and anti-ransomware protection. In our phishing protection test, it blocked 98% of fraudulent sites. With ransomware, Webroot has let it run and encrypt some files, but eventually blocked the threat and averted all the changes.

By the default, Webroot will run the scan every day. Also, you can scan the system on demand. There are several types of scanning. You can check only RAM or hard drives for a quick scan. If you want to dig deeper and look for rootkits and trojans, launch a deep scan. And if you need to check only certain files or folders, you can customize the scanning process. 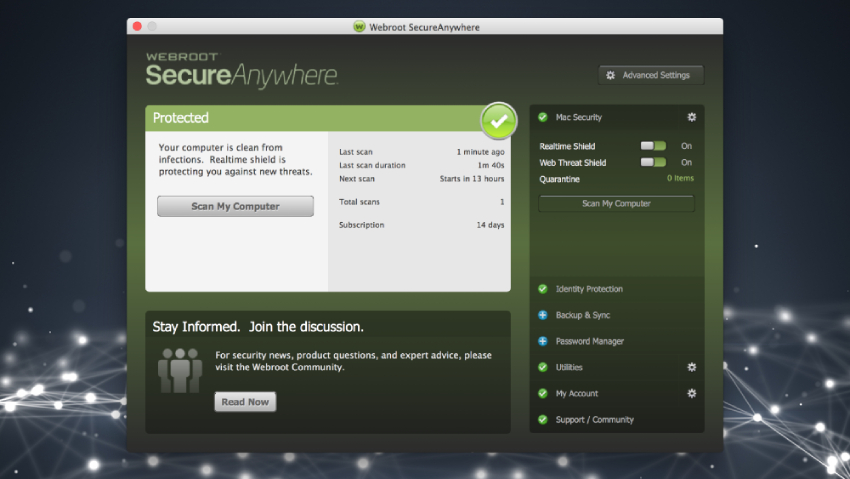 As we have mentioned in this Webroot review earlier, the provider claims to take only 20 seconds for the scan. However, during our tests, a deep scan took a couple of minutes and a quick one – 45 seconds. While it’s not 20 seconds mentioned on the website, it is still a good result.

Webroot interface looks a bit overwhelming with plenty of different buttons, icons, panels, and switches. But if the user doesn’t want to figure out all these settings, they can leave the antivirus as it is. Webroot performs well with the default configuration. At the same time, advanced users will appreciate that all the features are laid out on the main screen.

Webroot doesn’t require your credit card to use the trial, and it is excellent. You will still need to give your name and email, but nothing more than that. Then you will get a download link and the license key for a 14-day trial.

The installation process is rapid, which is no surprise as the antivirus is cloud-based. Moreover, Webroot doesn’t conflict with other antiviruses. Once it is installed, the system launches and runs a scan right away. It won’t take much time – in a minute or so the antivirus will be done. During our testing, even though it was a quick checkup, Webroot found some threats most antiviruses usually ignore.

Some antiviruses can be so annoying that they feel like viruses themselves. But that’s not the case with Webroot. It runs quietly, doesn’t install any extensions to your browser and in general doesn’t change anything except for eliminating threats. Also, it will check the hardware to optimize the scans for the future.

In the interface, users can see the information about their systems and a menu on the right side. There are several sections with separate settings icons. Above, there is an advanced settings button. Experienced users can get their hands on the more precise tuning of the antivirus.

PC security section lists the basic features. If you want more control-click the gear icon. The same goes for every section – if you need more settings, you can get them. Therefore, advanced users can play with antivirus as they like and others can just enjoy the protection without wasting any efforts to set up the program.

Since the antivirus is cloud-based, most of its resources are not stored on the device. Therefore, it takes almost no space on the computer. Moreover, it doesn’t slow down the system even during the deep scan. Even if you experience any delays due to the outdated hardware, you can just wait – the scan won’t take more than just a couple of minutes.

The fact that Webroot checks your hardware is surprising, and it is a great feature. The program understands the resources it has and adapts to them to perform scans quicker while not overloading the machine with processes. So, even the very old computer will work somewhat smooth during scans.

If you decide to give Webroot a try, you’ll have three packages to choose from. Every next tier adds more devices and some extra features to the offer.

SecureAnywhere AntiVirus, the most basic package, comes with full protection against malware, ransomware, rootkits, trojans, and malicious URLs. Also, it safeguards users from identity theft. It offers nothing more than a good antivirus should – Webroot focuses on what matters and doesn’t disperse its resources on other things. With this package, you can protect only one PC or Mac. 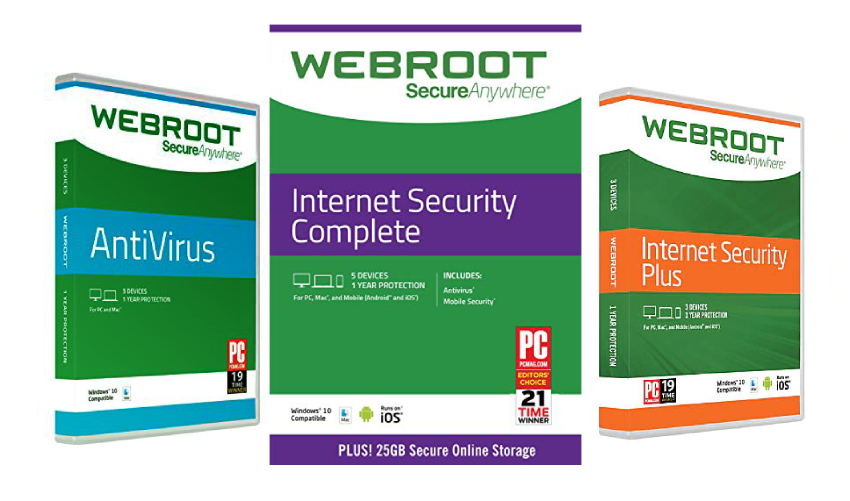 If you want to protect your mobile device too, go for the Internet Security Plus package. It covers up to three devices and offers all the features of AntiVirus. Additionally, you will get protection for your logins and passwords.

Internet Security Complete option offers all the features of the previous package but covers up to five devices. Also, it will eliminate traces of your online actions and provide you with 25GB of secure cloud storage for your data.

As the company puts it, with this package, you won’t need any additional tools/services for protection. WiFi Security is Webroot’s standalone VPN (Virtual Private Network), while Virus Protection is the Internet Security Complete plan. Together, they do, indeed, create a secure layer of defense against outside threats.

With the VPN, you can hide your online activity from governments, hackers, and even your ISP (Internet Service Provider). The IS Complete tier, in turn, is the most expensive one from Webroot’s line-up. It protects up to 5 devices and is strong against ransomware, phishing, ID theft, keylogging, and more.

To get this security suite, you’ll have to pay 90 dollars for the first year. We tested both the VPN and the antivirus and were impressed by their performance and can confirm that this is money well-spent.

If you ever need some technical assistance from the Webroot team, you’ll have to deal with old-fashioned ticketing system. You’ll have to contact the support team via email describing your question or issue. Specialists respond rather quickly – the answer takes only a couple of hours. Unfortunately, there is no live chat or help over the phone. But you can contact the provider via Twitter or Facebook. 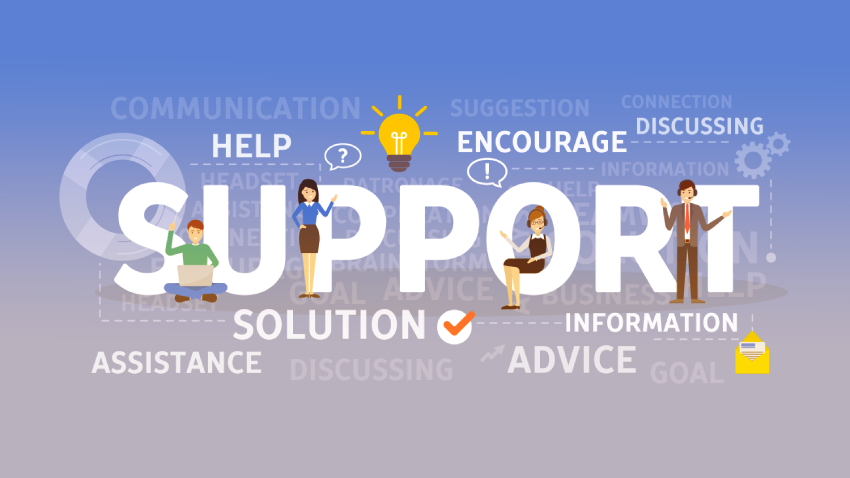 Additionally, there is a knowledge base on the Webroot’s site. You only need to enter the required keywords to find relevant topics. The knowledge base is full of useful articles and guides, so chances are you won’t even need to write an email to the support team. You will find answers to the common questions in the Q&A section.

Besides, there is a huge community. You can go to the forum with almost 50 000 members. Several hundreds of them will be definitely active as you ask your question. Apart from the help, you can find a lot of other useful information on the forum.

Unusual detection techniques make Webroot stand out from other antivirus solutions. Unlike most competitors, Webroot doesn’t use signature databases. Instead, it solely relies on behavioral analyses, which lead to mixed results in independent labs.

Still, if you test Webroot with regard to its specific approaches, it proves to be an effective yet lightweight antivirus that will not overload your device. Moreover, it will adapt to your machine to take as few resources as possible. You will not get many extras with Webroot, but pricing is affordable. Overall, Webroot is a good choice both for tech-savvy and regular users looking for reliable protection.

Harry Brown
Experienced and tech-savvy reviewer, Harry knows exactly what to expect from good antivirus software. His professional life was and is closely connected with cyber security and cybercrime prevention. It gave him the necessary vision of how perfect protection should function. It will be difficult to imagine that Harry would miss any modern tech security innovation – once it is launched, it should be studied and “dissected.” He understands how important it is to always stay up to date and that is 99% percent of success. Therefore, Harry Brown’s motto is to keep on moving and exploring the new technological paths. He has personally tested all the most popular solutions available in the market, and his all-round unbiased reviews will make it easier for you to choose the antivirus that suits you best.